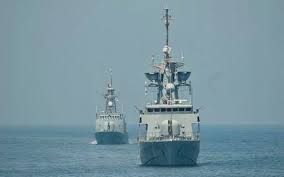 The signing of the Accords has helped remove strategic obstacles for New Delhi and aided defence cooperation.

The recent visit by the Indian Air Force chief, Air Chief Marshal R.K. Bhadauria, to Israel offers a window to study how New Delhi is taking advantage of the Abraham Accords deal signed between Israel and a consortium of Arab States led by the United Arab Emirates (UAE) in 2020 According to reports, an Indian contingent of the Indian Air Force (IAF) will now visit Israel in October to take part in multilateral military exercises.

In the same week as ACM Bhadauria’s visit, India also conducted the ‘Zayed Talwar’ naval exercises with the UAE off the coast of Abu Dhabi, further deepening the fast-developing strategic cooperation between the two countries. In December 2020, Indian Army chief, General M.M. Naravane, visited the UAE and Saudi Arabia, becoming the first chief of the Indian Army to do so. The foundation for these visits was set by the (now former) chief of the Indian Navy, Admiral Sunil Lanba, in 2017, who visited the UAE and Oman, the latter being home to Duqm Port where New Delhi signed a deal with Muscat for access to the facility, including dry dock use by the Indian Navy. The above examples show the pacey developments on the defence front between India and the West Asian region. The signing of the Accords has removed a significant strategic obstacle for New Delhi — that of a trapeze wire delicate balancing act India has had to play out between the Arab Gulf and Israel over the decades. This status quo is now witnessing a change, with Israel inaugurating its first diplomatic mission in Abu Dhabi and direct flights, business and tourism picking up between the two countries over the past few months. New Delhi had welcomed the Accords, highlighting its support for mechanisms that offer peace and stability in the region.

India’s trajectory towards an increased strategic footprint in West Asia has been in development for some time now. Starting from the relatively low-key staging visit to Saudi Arabia conducted by the IAF in 2015, to hosting visiting Iranian naval warships in 2018, defence of the critical waterways in and around the Persian Gulf, the Arabian Sea and the extended Indian Ocean Region (IOR) has taken a driving seat in Indian strategic thinking.

Recently, as tensions between Iran, Israel and the United States flared up in the Persian Gulf, the Indian Navy orchestrated Operation Sankalp, which saw Indian warships escort on an average 16 Indian-flagged vessels a day. This comes as covert attacks on merchant vessels in the region expand, with tensions between Iran and Israel spilling across the region. Till a certain extent, the Accords, from the UAE’s perspective, were to make sure the emirate along with its international centres of trade such as Dubai and Abu Dhabi do not become targets between Jerusalem and Tehran. However, not all Arab States have been on board with the geopolitical shifts the Accords have pushed through. Despite a lot of effort from Israel, under the (now former) Prime Minister Benjamin Netanyahu, Saudi Arabia has maintained a distance from this arrangement. More recently, Riyadh has praised the Accords, but said that the resolution of the Palestinian State remains at the forefront of its requirements.

It is imperative to remember here that despite India’s rare but arguable successes in a ‘non-alignment’ approach in West Asia, it has taken one-sided decisions in the past, such as training Iraqi Air Force cadets on MiG aircraft in Tikrit between 1958 and 1989, while also maintaining good relations with former President Saddam Hussein, seen as a critical part of India’s energy security thinking. The rationale behind such thinking back then has not changed even in 2021, as India still imports more than 80% of its annual oil requirements, much of which still comes from suppliers such as Iraq and Saudi Arabia.

Iran, as part of India’s ‘West Asia’ construct, will also play a significant part in India’s outreach in the months to come as the crisis in Afghanistan deepens. The fact that New Delhi used Iranian airspace and facilities when evacuating its diplomatic staff from Kandahar in July showcases a level of strategic commonality, interest and play on certain issues in the region. Keeping this in mind, connectivity projects such as Chabahar Port and Chabahar-Zahedan rail project (project discussions are still on) amongst others remain critical. Recent multiple visits by India’s External Affairs Minister S. Jaishankar, and Defence Minister Rajnath Singh followed by Iranian Defence Minister Brigadier General Amir Hatami’s visit to India highlight a revitalised strategic cooperation between the two countries despite multiple obstacles in the bilateral relations, led by U.S. sanctions against Tehran and the general tensions between Israel, the Gulf and Iran via proxy battles in theatres such as Yemen, Syria and beyond.

India’s strategic play in West Asia will be reflective of its economic growth, and by association, an increasingly important place in the global order. From the UN Security Council to the Indo-Pacific, New Delhi will be expected to be more assertive, diplomatically and militarily, in its posturing and shed the cloaks of its foreign and strategic policies being conducted from a stage balanced on a fence.