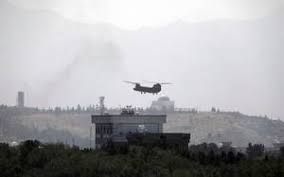 A moral disaster for the west

Weak-willed, like Britain after World War II, the U.S. has enacted a shameful flight from Afghanistan.

At the momentous fall of Kabul, Aisha Khurram, a young Afghan woman, had tweeted, “Dear world:/ Does your heart not ache?/ Does your blood not move?/ To see the displaced/ To see the agonizing pain my people face. How do you react to the number of people being killed and displaced in Afghanistan without feeling at least some level of panic?” It would be a reasonable surmise that U.S. President Joe Biden’s heart does not ache for the people of Afghanistan. After all, once you have decided to have blood on your hands, you are no longer moved by human suffering. The President may have been acting out his presumed destiny, for buried deep in the psyche of the west is the conviction of the otherness of the east, whose people count for less than their own. After all, the Democrat Biden was only taking forward the intent expressed by the Republican Donald Trump at election time that he would bring the troops back.

The American historian Stanley Wolpert has provided a useful foil to much of the academic history writing on India from Britain, characterising the U.K.’s departure from India in 1947 as ‘Shameful Flight’. In the British official records, this event is presented as ‘the transfer of power’, eliding the partition of a subcontinent on religious lines and the horrific butchery that had followed. It is not just that this may be seen as an ungrateful act after Britain had gained immeasurably from the possession of India. The commodity and financial flows that were extracted from India had started with the East India Company but continued unabated after its rule was replaced by the British Crown once India’s First War of Independence showed up the usurper’s shaky hold on the country.

The rise of the U.S.’s economy, and thus political power, is not independent of this. The slave economy of the New World had thrived on the Industrial Revolution in England by supplying it the cotton that it devoured, and the latter had gained from a vast captive market in India, which India could not protect due to its dependent status, even as western powers protected theirs. All the while, the narrative was propagated that the British were in India to provide good governance, as if the record of Ashoka Maurya and subsequent native princes was inadequate.

After the Second World War, Britain’s mantle was taken over by the Americans. Ostensibly to checkmate a communism that suppresses human rights they preferred a Pakistan ruled by dictators over a democratic India, mercilessly bombed first Vietnam and then Cambodia, and effortlessly switched their allegiance from Taiwan to their one-time foe Mao Zedong. In their unflinching support to their ally Pakistan, they even sent the Seventh Fleet to intimidate an India that had gone to war in Bangladesh following a genocide unleased by Pakistani generals. In pursuit of this strategy they finally reached Afghanistan which had been overrun by the Soviets. The Americans funded the mujahideen, the forerunners of the present-day Taliban. Then 9/11 happened, and the hunt for Osama bin Laden began. Believing him to be hiding in Afghanistan, they first bombarded and then invaded it, only to find him ensconced in Pakistan. The Americans now found themselves in the wrong country, but remained there for 20 years. It is not clear what they did during this time but building a strong democratic state that could secure human rights was not one of them. Weak-willed, like the British after the Second World War, the Americans have re-enacted a shameful flight, leaving millions to face the Taliban, known for their misogyny, visceral hatred of democracy and intolerance towards anyone who dares question their interpretation of Islam. This is a moral disaster for the west, that has for the past 200 years projected itself as the pre-eminent defender of liberty and egalitarianism, the bedrock of democracy. In world politics, India is on her own now, and has no option but to be the sole defender of human rights. Will we rise to the challenge?