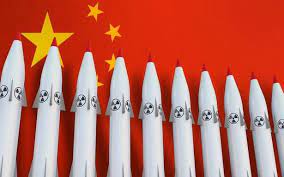 Even if there is contention about the scope and prospective size of Beijing’s capabilities, India needs to be watchful.

More evidence emerged recently that the People’s Republic of China (PRC) is expanding the size of its nuclear arsenal by building more missile silos. The debate, though, surrounding China’s nuclear build-up is mired in considerable dispute. The source of contention is over the scope and prospective size of the PRC’s nuclear capabilities. The construction of the nuclear missile silo field in Xinjiang region in western China indicates the PRC is fielding a larger nuclear force based on fixed land-based capabilities. The site is believed to host 110 silos. This development comes against the backdrop of evidence that China had built a site with 120 silos in the arid region of Yumen, in the Gansu province.

The most likely reason behind the current expansion of China’s nuclear arsenal is: increase the survivability of its arsenal against a first strike from their nuclear adversaries, most prominently the United States. Washington, which possesses a larger arsenal, stands at 3,800 warheads, and paired with its growing missile defence capabilities poses a threat to Chinese retaliatory nuclear forces. However, other countries too loom large in China’s nuclear expansion such as Russia and India, even if Russia is not an overriding concern presently.

Rate and extent is key

The key question is not so much why or whether the PRC is expanding its arsenal, but rather the rate and extent of the production. Does China want a usable and deployable atomic stockpile running into thousands of warheads, or does Beijing want an arsenal in the middle to high hundreds? Making a precise estimate of the PRC’s nuclear strength is not easy. However, Chinese nuclear forces stand at roughly anywhere between 250 to 350 nuclear warheads according to the Stockholm International Peace Research Institute (SIPRI) as well as the Federation of American Scientists (FAS).

Last year, the United States Strategic Command (USTRATCOM) chief Admiral Charles Richard stated that the PRC could double its current operational stockpile which is still in the “low 200s” over the next decade. However, the current silo-based missile expansion being undertaken by the PRC can be misleading, because the PRC’s quest might be as much to conceal the number of missiles tipped with nuclear warheads in its possession as it is to disassemble and deceive by building a large number of decoy missile silos.

Land-based nuclear capabilities also enable the Chinese to present a nuclear adversary with a larger menu of targets to strike, exhausting a large number of the enemy’s missiles in a first strike. Indeed, some of the decoy silos are meant to absorb and exhaust a part of the enemy’ first strike nuclear forces. Thus, the larger the target list for any potential opponent, the greater the chances of China’s arsenal surviving a first strike thereby boosting the credibility of China’s nuclear deterrent. In all probability, the PRC is expanding its nuclear forces if not to match the larger nuclear forces fielded by the Americans and the Russians, but sufficient to withstand a first strike and then execute a retaliatory attack that would defeat U.S. missile defences.

China’s nuclear tipped ballistic missiles forces, whether land-based or sea-based, have certainly improved in quantity and quality. The PRC’s Intercontinental Ballistic Missile (ICBM) capabilities and Intermediate Range Ballistic Missile (IRBM) capabilities in the form of the Dongfeng-41 (DF-41) and the DF-26, respectively, are its most potent land-based missile systems. At least 16 launchers of the DF-26 are known to be deployed in the Xinjiang region close to the Sino-Indian border.

In the case of the first, the silos being built in Xinjiang and Gansu could house DF-41 ICBMs that are capable of carrying multiple warheads much like their road mobile counterparts. In addition, the decoy silos can launch conventional armed ballistic missiles, and since they are likely to be interspersed with nuclear-tipped missiles, they create inadvertent escalation risks.

What New Delhi should track

Consequently, the latest development of silos presents a grim and disturbing set of consequences for the world and India. The PRC has refused to enter any tripartite arms control negotiations with Americans and Russians that could forestall the deployment of a more numerically robust nuclear arsenal, and possibly sees its current build-up as a necessity to bridge the nuclear asymmetries it faces vis-à-vis Washington and Moscow.

The growth in China’s nuclear arsenal might not have an immediate impact on India, but its development of land-based nuclear silos in the Xinjiang province should worry decision-makers and strategic elites in New Delhi given the region’s proximity to India. More importantly, it is likely to have an impact on the ongoing boundary stand-off between the two countries in Eastern Ladakh. The issue is not so much actual nuclear use by the PRC against India, but the coercive leverage fixed land-based nuclear capabilities give the Chinese in consolidating their territorial gains in Depsang, Demchok and Gogra-Hotsprings. If anything, it is likely to produce a suppressive effect against any conventional military escalation. The more extreme and adverse outcome for India is that New Delhi is left with no choice but to accept China’s fait accompli.

The strategic balance between China and India is unlikely to be altered because of the Chinese nuclear expansion, but New Delhi would be wise to keep a close eye on its neighbour and work on enhancing its own strategic capabilities. Amidst an all-round sharpening of great power contestation, the nuclear issue will continue to challenge policymakers.