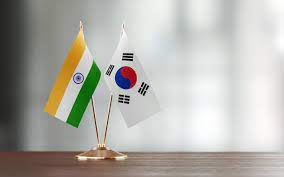 There is much potential for Seoul to become the fourth pillar in New Delhi’s Indo-Pacific strategy.

Indo-Pacific turbulence has reached an all-time high, to the point where it rivals the diverse foreign policy challenges across the United States and Europe. At a time when the international rules-based order is getting increasingly contested, the options available to governments in the foreign, economic, and security policy areas (including maritime security), are under serious stress.

From drift to a shift

During the past five years, India and South Korea have experienced considerable divergence in their respective national objectives. There was a clear drift by South Korea away from multilateral security initiatives led by the United States, such as the Quad (the U.S., Australia, India and Japan); meanwhile, India has been actively participating in them.

The newly elected Korean President, Yoon Suk Yeol, has brought about a paradigm shift in South Korean foreign and security policies. He has proposed that South Korea should step up to become a “global pivotal state, anchored in liberal values and a rules-based order”, that “advances freedom, peace, and prosperity through liberal democratic values and substantial cooperation”. South Korea’s new willingness to become a global pivotal state and play an active role in regional affairs is bound to create multiple opportunities for a multi-dimensional India- Korea partnership.

In the last few years, India and South Korea have faced serious blockades to their economic ties. Trade between the two countries was sluggish and there was no major inflow of South Korean investment into India. India and South Korea were also trying to upgrade their Comprehensive Economic Partnership Agreement (CEPA) agreement, but to no avail.

South Korea’s strategic policy shift to correct its heavy tilt towards China is bound to bring new economic opportunities for both countries. Both nations will now be in a better position to understand and accommodate the other’s trade investments and supply chain needs. The trade target of $50 billion by 2030, which looked all but impossible a few months ago, now seems within reach.

The emerging strategic alignment is creating a new convergence of capabilities and closer synergy in new areas of economic cooperation such as public health, green growth, digital connectivity, and trade, among others.

In 2020, India and South Korea signed a Roadmap for Defence Industries Cooperation between the Republic of India and the Republic of Korea (ROK) deal. However, due to the lack of political and strategic alignment, nothing came of it. With the strategic shift in South Korea’s defence orientation, new doors of cooperation for defence and security have emerged. Advanced defence technologies and modern combat systems are the new domains for the next level of defence cooperation between the two countries.

South Korea’s participation in additional maritime security activities in the Indian Ocean, such as the annual Malabar and other exercises with Quad countries, will further strengthen India’s naval footprint in the Indo-Pacific region. During the Moon Jae-in presidency in Korea, Japan and South Korea were at loggerheads. There was little scope for strengthening the trilateral security dialogue in the region between India, South Korea and Japan. The shift in South Korean policies will enable a strong India, South Korea and Japan defence policy coordination that could effectively forge new joint regional security policies.

India has evolved excellent strategic partnerships with Japan, Vietnam and Australia. Unfortunately, so far, South Korea has not received the same level of attention from the Indian establishment. This needs to change. South Korea could be the fourth pillar in India’s Indo-Pacific strategy along with Japan, Australia, and Vietnam. This can bring about a paradigm shift in India’s position and influence in the region.

The time has come for the Indian and South Korean bilateral partnership to be strategically scaled up at the political, diplomatic and security domain levels. With South Korea’s emergence as a leader in critical technologies, cybersecurity and cyber-capacity building, outer space and space situational awareness capabilities, South Korea can contribute immensely to enhance India’s foundational strengths in the Indo-Pacific.

However, the current emerging alignment between India and South Korea, which has the potential to bring the two countries closer together, may prove short lived if proper attention is not paid to the multi-dimensional challenges it faces. The Chinese leadership is adversely impacted by policy changes brought in by the Yoon administration. The real challenge for global geopolitics is this: can South Korea withstand the inevitable Chinese pressure and stick to its new alignment?

As Republicans are gaining strength again in domestic politics in the U.S., we need to consider what will happen if the former U.S. President, Donald Trump, returns to power in the next elections. Mr. Trump was unconvinced about the relevance of the U.S.-Korea partnership and had discussed withdrawing U.S. forces from South Korea.

The threat of Mr. Trump at one time to abandon the relationship with South Korea was real. This situation was prevented by Mr. Yoon’s dynamism that encouraged all major powers to support South Korea’s stand for stability and peace.

South Korea’s peace process with North Korea has completely collapsed. In the coming days, as North Korea conducts more missile and nuclear tests, it may lead to regional tension. Any breakout of hostilities on the Korean Peninsula can derail South Korea’s Indo-Pacific project.

During the Moon presidency, South Korea was forced to sign the “three no’s” agreement with China. Under this agreement, Korea agreed to: no additional Terminal High Altitude Area Defense (THAAD) deployment; no participation in the U.S.’s missile defence network, and no establishment of a trilateral military alliance with the U.S. and Japan.

India can help South Korea withstand Chinese pressure and North Korean threats. An independent, strong, and democratic South Korea can be a long-term partner with India, that will add significant value to India’s Indo-Pacific strategy. This new partnership can have a long-term positive impact for both countries and the Indo-Pacific region. It is an opportunity that neither country can afford to miss.