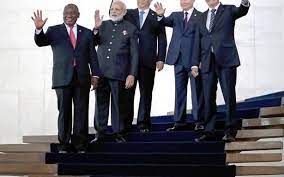 The grouping succeeded up to a point but it now confronts multiple challenges.

The 13th BRICS summit is set to be held on September 9 in digital format under India’s chairmanship. This plurilateral grouping comprising Brazil, Russia, India, China and South Africa is chaired by turn. India held the chair in 2012 and 2016 too. The preparatory meeting of Foreign Ministers in June and dialogue at the BRICS Academic Forum in early August offered an important opportunity to present an objective assessment of the grouping’s record amid differing views of believers and sceptics. The importance of BRICS is self-evident: it represents 42% of the world’s population, 30% of the land area, 24% of global GDP and 16% of international trade.

External Affairs Minister S. Jaishankar, noting that BRICS was 15 years old, recently portrayed it as a young adult, equipped with “thoughts shaped and a worldview concretised, and with a growing sense of responsibilities.” Others tend to view it as caught up in angst and confusion typical of a teenager.

Still, member states have been carrying BRICS forward in an era of complex geopolitics. They have bravely continued holding dozens of meetings and summits, even as China’s aggression in eastern Ladakh last year brought India-China relations to their lowest point in several decades. There is also the reality of the strained relations of China and Russia with the West, and of serious internal challenges preoccupying both Brazil and South Africa. On the other hand, a potential bond emerged due to the battle against COVID-19. In this backdrop, does BRICS truly matter?

Launched by a meeting of the Foreign Ministers of Brazil, Russia, India and China in 2006 and riding on the political synergy created by regular summits since 2009, BRIC turned itself into BRICS in 2010, with the entry of South Africa. The grouping has gone through a reasonably productive journey. It strove to serve as a bridge between the Global North and Global South. It developed a common perspective on a wide range of global and regional issues; established the New Development Bank; created a financial stability net in the form of Contingency Reserve Arrangement; and is on the verge of setting up a Vaccine Research and Development Virtual Center.

What are its immediate goals now? As the current chair, India has outlined four priorities. The first is to pursue reform of multilateral institutions ranging from the United Nations, World Bank and the International Monetary Fund to the World Trade Organization and now even the World Health Organization. This is not a new goal. BRICS has had very little success so far, although strengthening multilateralism serves as a strong bond as well as a beacon. Reform needs global consensus which is hardly feasible in the current climate of strategic contestation between the U.S. and China and the devastation caused by COVID-19 to health, lives and livelihoods. Nevertheless, Indian officials rightly remind us that BRICS emerged from the desire to challenge dominance (by the U.S.) in the early years of the century, and it remains committed to the goal of counter-dominance (by China) now. Mr. Jaishankar observed that the “counter-dominance instinct and principled commitment to multipolarity in all forms” is “written into the DNA of BRICS.”

The second is the resolve to combat terrorism. Terrorism is an international phenomenon affecting Europe, Africa, Asia and other parts of the world. Tragic developments concerning Afghanistan have helped to focus attention sharply on this overarching theme, stressing the need to bridge the gap between rhetoric and action. China, for example, feels little hesitation in supporting clear-cut denunciations of terrorist groups, even as its backing of Pakistan, which is heavily enmeshed with a host of international terrorist groups, remains steadfast.

In this context, BRICS is attempting to pragmatically shape its counter-terrorism strategy by crafting the BRICS Counter Terrorism Action Plan containing specific measures to fight radicalisation, terrorist financing and misuse of the Internet by terrorist groups. This plan is expected to be a key deliverable at the forthcoming summit and may hopefully bring some change.

Promoting technological and digital solutions for the Sustainable Development Goals and expanding people-to-people cooperation are the other two BRICS priorities. Digital tools have helped a world adversely hit by the pandemic, and India has been in the forefront of using new technological tools to improve governance. But enhancing people-to-people cooperation will have to wait for international travel to revive. Interactions through digital means are a poor substitute.

Among other concerns, BRICS has been busy deepening trade and investment ties among its member states. The difficulty stems from China’s centrality and dominance of intra-BRICS trade flows. How to create a better internal balance remains a challenge, reinforced by the urgent need for diversification and strengthening of regional value chains, all exposed during the pandemic. Policymakers have been encouraging an increase in intra-BRICS cooperation in diverse areas like agriculture, disaster resilience, digital health, traditional medicine and customs cooperation.

The idea of BRICS – a common pursuit of shared interests by the five emerging economies from four continents – is fundamentally sound and relevant. The governments have invested huge political capital in pushing the BRICS experiment forward, and its institutionalisation has created its own momentum.

The five-power combine has succeeded, albeit up to a point. But it now confronts multiple challenges: China’s economic rise has created a serious imbalance within BRICS; Beijing’s aggressive policy, especially against India, puts BRICS solidarity under exceptional strain; and BRICS countries have not done enough to assist the Global South to win their optimal support for their agenda. It is necessary for leaders, officials and academics of this grouping to undertake serious soul-searching and find a way out of the present predicament.

A parting thought: BRICS negotiators need to master the art of brevity and tight drafting. When they do so, they will realise that unduly lengthy communiqués are an index to the grouping’s weakness, not strength.